Okay, I seem to be in one of those moods where the world is just making me scratch my head. (I rarely step into personal opinion mode, but I just need to spout today.) First RWA and now the American Humanist Association. If you’re not up for another rant you’ll want to move along now …

Now, in the spirit of full disclosure I want to let you know I’m Catholic. Baptized. Confirmed. And married in the Catholic church. And though I’m not practicing it’s who I am to the very soles of my feet. This information will become significant in a moment. 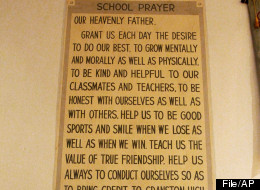 A few months ago a 16 year old high school student in Cranston, RI decided that the prayer banner hanging in the gymnasium of her high school violated her constitutional rights because it contained the words “Heavenly Father” and “Amen”. You see, she’s an atheist. She was forced to see the banner every time they had mandatory school assemblies in the gymnasium where it was displayed. And I suspect during mandatory gym classes as well.

Now wait … let me finish. She is welcome to her beliefs. This isn’t about that. This is about AHA standing behind this young woman to try to make a point. This young lady sued the school system to have the banner removed. The argument for the banner wasn’t to display the Christian beliefs, but to preserve an historic artifact. The prayer was written by a member of the first graduating class of the high school. Yes, the student body at the time the school was built in the 50’s was no doubt a homogenous group of middle income Christian young men and women. And it is true life has changed and that is no longer the case. But students with other religious beliefs didn’t find the banner offensive. They didn’t bring a lawsuit that cost the town and school system $150,000. (Like a school system in this day and age can afford that amount of money out of their budget. *headdesk*) It was this group standing behind this young lady (and covering her court costs) trying to make a statement.

I get it. There are atheists among us. So? There are also muslims, jews, buddhists, protestants, catholics and agnostics rubbing elbows with us at the mall or sharing a seat with us on the bus. Why do I care if they’re reading a Bible or the Koran next to me? I don’t. Can’t we all respect each other?

Because now it seems like the AHA is emboldened by having the court decide in their favor and now they’re going after a soldier memorial in Providence.

The memorial is on city property in front of the town hall and displays a cross.

Seriously folks … why? I can honestly say that if this soldier had been jewish and the monument had a Star of David displayed, I would not be offended as I passed it going into the town hall. The monument is historical. Is this group of activists so intent on making sure nothing religious is displayed in public that they’re willing to erase all historical artifacts from every piece of public property in the United States? I seriously believe they’re going after another Rhode Island landmark because they know the state won’t spend the money pushing the lawsuit up the judicial ladder.

And it just irks me. I understand this group doesn’t want to be bombarded with religious symbols. But it’s a part of who we are. The United States is a melting pot. That means people of all races and religions are living within our borders. For goodness sake stop trying to act as if there is no religious history in our nation.

Am I way off base here? What do you think of all of this? Because you know me … I’m always curious about stuff like this.