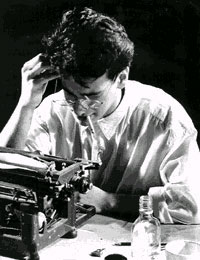 Cigarette hanging from her mouth, the ash long and dangling. Smoke circle her head as fingers peck out a rapid tattoo on the the old Royal. Papers balled and crumpled near the waste basket as her characters chatter incessently in her ear, but not loud enough to get it juuuuust right. And as the final pages add up on the corner of her desk, she renews her efforts to finish that manuscript and get it out to a publisher.

That’s how I picture my favorite author’s careers in the past. It was all about the writing. All about receiving that boxed manuscript from an editor with redlines and arrows indicating editing suggestions. Editors and publishers had time to put time and energy into a book, to groom the author and create an image and a marketing plan for her and her books.

Sadly, those days are gone.

An author no longer has the the luxury of just sitting down at her computer and pounding out a new best seller. There are so many hats she must wear. Writer, editor, marketing guru and in many cases, publisher.

Publishers now want to see manuscripts that have had the bulk of the editing done. Beta readers and critique groups are now working with an author to find unforgivable flaws with a hero no reader can love. They’re helping fill in those small plot line holes that an editor used to discover. If a manuscript hits an acquisition editors desk with any of those problems it will no doubt receive a form email rejection. If the author is fortunate, there will be some explanation as to why it was rejected, but often there isn’t time for an editor to explain in detail why a book “doesn’t fit”.

With the advent of digital books authors are no longer receiving advances. Advances meant an author was compensated up front for months of being bent over the keyboard. Without the advance, the author now depends only on royalties from sales to make her money. (I don’t even want to speculate my hourly rate of pay for the books I’ve written.) Without the backing of a marketing department from the good ‘ole days, it also means she has to go out and pound the pavement to let readers know she has a new book out there. Spending time on Facebook and Twitter shouting about her book, which equals time away from writing the next book.

Now, Amazon and Barnes & Noble among other venues, have made it possible for an author to actually publish her own book without going through an agent or publishing house. And as exciting as this has become for authors to have full control of their books, it’s also a heck of a lot of work. It becomes the responsibility of the author to find her editor and cover artist. To make sure the book is formatted correctly for all digital platforms. And as you can imagine, this means more time away from writing.

To keep up with this changing world many authors are hiring assistants who can help with the extraneous work load. Of course you need to have the sales to justify this expenditure. Ah hem, I so am not there … yet. And there are publicity companies who are hired by authors to go out and do some of the pavement pounding. But as a reader I find them very annoying and they become white noise in the thrum of all the book marketing. Since I delete these announcements from my email and ignore them on Facebook, I haven’t bothered with any of the companies.

I keep saying this year I’m going to figure this whole thing out. To set a schedule of some sort that not only allows time for all of these things AND writing. Of course before all that happens I do have to get my personal life to slow down juuuust a little.

As a reader do you see these changes effecting your buying habits or has it all happened in the background unnoticed by you? If your an author, are you happy with all the changes in publishing or would you like to go back to the days before digital books? Because you know me, I’m curious like that.

The Bumpy Road to Publication

There are so many choices for new authors who want to see their book in the hands of a smiling reader. The road to publication no longer follows a straight path to NY. It is often a twisting maze of luck and perseverence.

With new publishing houses popping up every day and other publishers imploding, leaving authors begging for the manuscripts back, it can be a mine field wading through facts and rumors. Add to that the loud voices of those that are finding gold in the hills of self-publishing and you have a plethora of confusion on what is best for your manuscript.

So where do you start?

First, decide what it is you want from your writing. The satisfaction of seeing your words in print? A little extra income? A living wage and writing full time? What is your ultimate goal? It will certainly give you direction. For me, quite honestly, it was the income. As so many of you know I had to give up teaching due to medical reasons. And though it wasn’t much in the grand scheme of things, my salary did contribute to the family budget. I want to have that again. And I will.

With that in mind I wrote my first book and began sending it out while working on my second book. Rejections piled up and still I wrote and sent out queries on my second book. More rejections followed. I finally stepped back and reassessed, looked at the market (because I wanted income) and wrote a book I thought would fit the erotic romance market which was growing exponentially at the time. I also realized my only avenue wasn’t print, but digital publishers. I queried several new up-and-coming publishers and three well established houses. I got four offers, an offer of re-write and a rejection. One publisher called me directly. Boy, was I thrilled. But I didn’t jump on it. Why? Because it was a publishing house that had been around only a year.

Here’s the thing I did next and I think more authors should take time to do. I emailed random authors on the publisher’s author list. Why? Because they’re in there and know better than anyone how the publisher works. The good, bad and downright ugly. I asked specific questions about editing staff and techniques. About sales and royalty payments. How long from contract to publication. I even asked about percentage of books going to print. Authors are wonderful people and most will be honest … brutally honest, which is what I wanted. Granted, there were some who did not respond to my emails, but that gave me information also.

From these emails I accepted a contract with Liquid Silver Books. And though I no longer have books there, I will be forever grateful to them for giving me such a wonderful start to my writing career. I HIGHLY recommend them and would tell that to anyone who asks. And let me just tell you, two of the four who offered contracts and whose authors never responded to me have recently gone under. Seriously, a little research goes a long way.

And what of self-publication? Another avenue to explore and consider. It’s not as difficult for someone like me who publishes digitally anyway. There are no huge formatting issues for upload so don’t let that slow you down. Nor does the marketing and promotion change. Because if you’re with an e-publisher already, you know the importance of getting out there and marketing your book. So what is there to consider? Editing and cover design, both of which can be a considerable outlay of money. Whether you have the readers who are auto-buys for your books or your looking to begin a readership. All are important things to weigh when you’re thinking of going this route.

There is money out there for sure, but don’t go into self-publication with stars in your eyes. The reality is many people aren’t selling. Many aren’t making money. *slowly raises hand* Sales get sales. If a book doesn’t have sales, it isn’t going to show up on the lists. If it doesn’t show up on lists, it’s not going to get the attention of new readers. And all the great reviews and marketing aren’t going to get your book in front of the general Amazon surfer, which is your ultimate goal. Now, don’t get me wrong, I’m not saying don’t go that route. I’m simply saying, like all parts of the publishing world, go into it well informed.

My goal for 2012 is to have my toes dipping in all of the markets, mass market print, digital and self-pubbing. There is no one way that is correct. In this day and age, an author needs to weigh their options and make decisions that fit them best.