Why I Write Romance 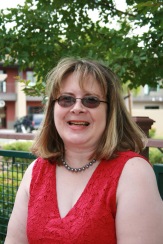 I’d like to welcome my guest, romance author, Jill James. Take it away Jill …

I often get asked why I choose to write romance novels. Yes, we are the stepchild of the industry while being its biggest moneymaker. Yes, we are accused of being formuladic, while always guaranteeing our readers a happily-ever-after. Yes, we are misunderstood and miscategorized as Miss Mary Sunshines, while our stories can be deep, meaningful, and many-faceted. I choose to write and read romance for all of the above.

My mom gave me my first romance novel for my twefth birthday, a little green book titled Lily of the Valley to go with the Lily of the Valley perfume from Avon. I still have the book, the perfume is long gone. The story is rich and textured with misunderstandings, jealousy, and revenge. It is a story of a blinded perfume maker and the spinster he thinks he is rescueing and in the end she rescues him.

A few years later I read Skye O’Malley by Bertrice Small and I knew I wanted to be a romance author. Her story of the many husbands and many adventures of Skye O’Malley made me want to put my own stories to paper. To actual paper, because when I started writing my own tales they were on a Royal typewriter. You know, the ones where one mistake meant you had to rewrite the whole page. No cut and paste. LOL

My first unfinished stories will never see the light of day. I did not know there were rules in writing, and I broke them all. My heroine was married, kidnapped, and fell in love with her kidnapper. To be truthful, he was being blackmailed by the heroine’s mother-in-law to kidnap her, so he wasn’t ALL bad.

For many years, I wrote in solitude until an amazing thing happened. I discovered RWA (Romance Writers of America) OMG! You mean there are thousands of women just like me? It was like dawn breaking.

With the enormous help of many fellow RWA members I was able to finally see my name on a book and say I was a published romance author.

I write romance because dreams really do come true. 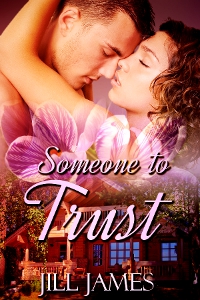 Jill’s most recent release, Someone to Trust is the second book in her “Second Chances” series:

BLURB:
Evie Grimes doesn’t trust men. She’s been lied to and deceived too many times before. Happily single, the last thing she needs is a man.

Brady Jackson is a former Marine. Now a carpenter, he is as honest as the day is long. What you see is what you get.

EXCERPT:
Chapter One
“Honey, it’s just a stupid business trip. You would be bored in Oregon.”

“Evie, sweetie. I love you, but you know you aren’t the smartest apple in the bunch.”

Blinking her eyes in the dark bedroom, Evie Grimes shuddered and took deep, cleansing breaths. Her ex-husband wasn’t here. He hadn’t been in her life for five, long, peaceful years now. Her heartbeat slowed, calmed, returned to a normal pace.

She turned on her side, hitting her pillow to relieve the residual tension in her shoulders.
Cold sweat pooled between her breasts. Sighing, Evie glanced at the bedside clock. She refused to get up at four in the morning just because her sadistic ex-husband had invaded her dreams again.

A car’s headlights traveled along the ceiling and she missed the lake even more than usual. Life in the little town wasn’t hectic. But the lake was so peaceful it made the town seem like a metropolis. She needed peace and quiet more and more as the nightmares returned.

It was only a matter of time before the calls started up again and she’d be forced to change phone numbers yet again. A step closer to needing to find a new town again, praying it would be the last time.

Tears filled her eyes, rolling down the sides of her face and wetting her hair. He always
found her and she always had to move on. Her thoughts ran in circles like a merry-go-round.

She threw off the covers and swung her legs off the bed. Even at four in the morning, the mugginess the day would later carry already filled the air. She strode down the hallway in her T-shirt and panties, all she forced herself to wear in the dog days of August in the sweltering foothills of the Sierra Nevada Mountains.

Her footsteps pitter-pattered down the oak flooring of the hallway. The beats of her still-racing heart pounded in her ears.

She flipped the switch on the wall and the kitchen flooded with light, banishing the not-yet dawn outside and the last dregs of her nightmare. Evie shuddered, wrapping her arms around herself.

So we’re curious … how did you come to enjoy reading/writing romance?