a touch of lilly

When readers are asked what first stops them and makes them pick up a book, 95% of them will say the cover. (Okay, so that’s not an actual statistic, but you get the idea that it’s most people.) So it’s no wonder authors are always anxious for the day the art department sends the cover for a new story. I have to say I’ve been really blessed with some awesome covers.

Healer’s Garden was my first ever cover and I cried when the image on the left arrived in my mailbox. (EC redid the cover with the image on the right when it was released through them in 2010.)

Then came the three Tilling Passions covers (currently not available)…

The cover artist and I worked for a couple of days to get those covers just right. The feel. The symbols. The couples. All of it came together to create the right mood for those books.

And so it’s gone for each of my stories. You can see all my covers to the right and each one was created to entice the reader to take a closer look. Now, as much as I feel very blessed by the cover Gods, no cover (with the exception of my first) has moved me to tears with the exception of …

The cover artist, Reese Dante, read every detail of my character and setting descriptions (right down to the scar on Dallas’ face) and totally captured my story. (This cover is an Ariana Cover Award finalist. I’m squeeing happy!) But okay, what’s this got to do with cover models?

Well … the image on the left, of my hero Dallas, is the cover model SAM BOND. I didn’t know this until a few days ago when Renee Vincent posted an interview of this man. (Along with some drool-worthy pictures … go on … check them out … I’ll wait a minute or two or three …)

Sam seems like a wonderful guy. But here’s the interesting thing for me. I’ve had pictures of “Dallas Sawyer” on my computer all during the writing of “A Touch of Lilly”. Every time Dallas did something a romance hero should do, I fell a little more in love with him. So it’s no wonder when I saw Sam’s picture that those feelings all come rushing back.

I know Sam is not Dallas. I’m not daft. (Well, about that anyway.) But the visual creates such a visceral response for me. Sam’s picture immediately throws me back into the story and the feelings his character evokes. And from some of the comments, I suspect I’m not the only one. Sam is really a great guy (and totally in love with his girlfriend, Emily), but I wonder if he really has any idea the impact his image has on readers and authors.

I don’t know, maybe I’m way out there. Perhaps my visual sense has overcome my common sense. So I’m curious … how do you see this whole thing. Book cover and cover model? Am I living in my own little fantasy world? Am I the only one affected by photos? Because you know me … I’m kinda curious that way.

And just in case you needed another stimulus, here’s a picture of Sam I lifted from his website. I hope he doesn’t mind. 😉 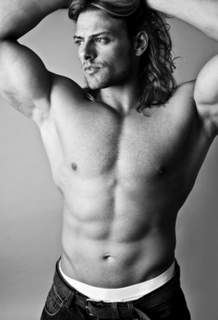 So October was actually a wash as far as writing anything new. I did manage two submissions and haven’t heard anything, but anxiously open my emails every day hopeful that a couple of contracts will be there waiting. So far … nothing. But I’m still hopeful.

You see, it’s not just that I’m in a writing funk, but Mr. Nina lost his job in mid August. We spent the next several weeks job hunting and though unemployment continues to hover around 9%, Mr. Nina found a new job less that six weeks after finishing his last. Yes, we are very lucky. We know this. Sadly, it meant moving out-of-state.

Again, I don’t mind. I grew up in Maine. It’s a beautiful state. But it’s also HUGE! I’ve lived 5 hours from my family for over 20 years. So this move to Rhode Island actually gets me closer to family.

We spent the better part of October fixing up our current house for selling and packing Mr. Nina. We moved him into his new apartment last week. It’s in this cool renovated mill and he’s got some really wonderful neighbors. It’s just missing one thing … ME! I’m holding down the fort in northern Maine until a buyer falls in love with our house.

So now the two of us are in different states. Too far apart to even visit on the weekends.

You never know how much time you spend with someone until they’re no longer hanging around you driving you crazy. LOL! I feel like I lost a funky little appendage I didn’t even know was so important to me. *sigh* Mr. Nina and I have slipped into that really comfortable phase where we’re hanging in the same room, but don’t even need to talk to communicate. Hopefully this won’t last long and our house will sell and I’ll be down there asking if we REALLY need to watch another football game.

With all this time on my hands I have decided to buckle down and get writing another story. I’ve got the vague outline in my head (which is all I really can start with) and I plan to get a jump on it this weekend. I’m not really ready to chat about it, but I’m pretty sure I’m going to run a contest around getting some help with the title so stay tuned.

“This is an erotic love story set in the universe of the future. It is about terror and hate, prejudice and murder, and lots of other stuff that make up a good action story. But at the core is the relationship between Dallas and his law enforcement partner as they focus on Lilly, learn more about her, begin to break down the animosity that existed initially between the three. It is not a story that is easy to figure out–lots of clues but no easy answers. The reader must persevere and read to the end. But, I think, in this case it is worth it.”

Here’s an excerpt from Chapter One of “A Touch of Lilly“:
Lilly D’Angelo could have been walking into any of the seedier establishments lining Forty-fifth and Wester on Chicago’s south side. Except for the clientele, the tavern’s owner had managed to replicate nearly every detail right down to the blue haze and the soft crooning of a jazz band on the corner stage. The acrid stench and gruff hum of a Friday night crowd tripped Lilly down memory lane—a place she had no desire to travel at the moment.

Lilly pushed the sour thoughts of home out of her mind and focused her energy on the patrons at the bar. Morphing her features into her sexiest vixen pout, she moved gracefully toward the long bar on the other side of the room. Her voluptuous breasts, spilling temptingly from her silk blouse, led the way. The eyes watching her ass sashay around the battered tables were clustered on various life forms—none of them human.
Yeah, definitely not Chicago. Shit, this wasn’t even Earth for chrissake.

“Regent’s ale, straight up, hold the brenic.” She spoke English, hoping the two-headed Xerick behind the bar had a cochlear translator in one of those eight holes that passed for ears. Satisfied when one head nodded, she settled on a stool, making sure her fur jacket and blouse parted enough to offer a seductive view of her cleavage. Lilly shifted just enough to let the black leather skirt ride up her thigh and expose a little more silky real estate. Surreptitiously checking her image in the mirrored glass behind the liquor bottles, she was pleased she looked every bit the part. She wasn’t trying to attract anyone in particular, perhaps something on the less offensive side that could offer her a bit of entertainment to help fritter away the next couple of hours.

Lilly wasn’t a xenophobic bigot by any stretch of the imagination. But six months in deep space, working these kinds of joints, wasn’t really long enough to become accustomed to the scenery. The Nebulae Galaxy’s spaceports overflowed with aliens of all sizes and genders. Only that wasn’t really a fair term here in deep space.

Alien inferred the life forms didn’t belong. On the contrary, it was humans who were invading their territory. The treaties of 2253, signed well over forty years ago, had guaranteed the safe travel of humans in deep space. After the snafu of ’34, which saw the first major space disaster since light travel had been discovered, humans had insisted on protection for their species. They’d formed some bullshit board of security, guaranteeing humans could run roughshod over the universe like everywhere else. Though most people referred to them as the QAL, Lilly nicknamed them the alphabet mafia. At one point she’d actually considered working for them until they’d discovered who she was—or more specifically what she was. It didn’t matter. They could all go fuck themselves if they didn’t appreciate her gifts. Lilly had found a way to use her talents and still bring down the bad guys.

Of course in deep space, bad was a relative term.

There was the kind of bad that got a person lost on the ice caps of Dallas Eight without a backup plan. Or the bad that forced someone to stow away in the engine room of a Drikspa alien tanker bound for unknown destinations, praying not to get caught. Or the bad that got a human female imprisoned as a sex slave on the mining colonies of Krystallos Three, hidden from even the long arm of the QAL. Lilly shivered at that one. Even her talents wouldn’t free her from that kind of torture.

She was just happy to be here on Garalon Five where bad meant nothing more than crossing paths with every brand of space pirate, ex-con or fugitive looking for a new start. As one of the more recent colonizations in the Nebulae Galaxy, the G-5 government turned their collective back on past offenses on other planets and allowed anyone to start a legitimate business. It’s what had brought her here.

I am squeeeeing happy over this new cover. It’s designed by Reese Dante.

Reese got all the details juuuuust right including Thaegan’s (Dallas’s alien QAL partner) skin and hair and Dallas’s scar. I’m snoopy dancing all over the place! And I only have to wait for JUNE 9 for the release date. *sigh* I LOVE cover day.