END_OF_DOCUMENT_TOKEN_TO_BE_REPLACED

Welcome to Six Sentence Sunday. This week I’ve chosen six sentences from my novella set in a NY vineyard, Divine Deception. Since I just received my copies of the print anthology it’s include in, I thought I’d celebrate this Sunday.

This scene takes place after Nick, who’s coming back to sell the family vineyard meets the cellarmaster’s assistant, Francesca. Frankie’s desperately trying to save the failing vineyard … and her home. 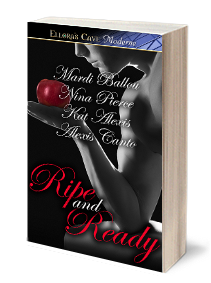 “I’m sure Nick is hungry after his long motorcycle ride from the city streets of Philly where he works so darn hard making a living and carousing with women,” Frankie said.

“Pharmaceutical research sure as hell beats worrying about the weather and sugar content of grapes,” Nick snipped before shooting back the last of his wine and splashing another generous amount into his glass. It wasn’t how a gentleman enjoyed a fine vintage but tonight he neither felt like a gentleman nor a connoisseur of wines. Tonight, he’d ignore the elephant of bankruptcy swinging from the chandelier and suffer through this farce of a family dinner raging drunk. “Any Neanderthal can mash and ferment grapes. It doesn’t take a Mensa certificate to squeeze grape juice into a refractometer and test for sugar levels, Francesca.”

I always appreciate all the comments I receive every week. Thanks so much for taking time to let me know what you think of the six sentences. Click HERE to find other amazing authors participating in today.

I LOVE release day! I love it even more when it’s a print book that’s being released. “Ripe and Ready” is an anthology that I’m privileged enough to share with Mardi Ballou, Kat Alexis and Alexis Canto. This book is a compellation of novellas in the “succulent” series including my novella Divine Deception.

Cholla from Whipped Cream Reviews gave it 4 CHERRIES and said…

“Together, Nick and Frankie make a dynamic couple just waiting to explode… either with passion or into an argument. Banded together, along with Frankie’s mother, Carmine, I highly doubt that any obstacle could keep them from achieving their goal. In true Nina Pierce style, the story is chock full of emotion, family ties, and steamy, hot sex making for one heck of an enjoyable read.”

How about an EXCERPT:
Having Nick present while she visited with Joseph wasn’t really in her plans. Frankie had tried to talk Nick into taking the motorcycle to the hospital later in the morning but Margaret had come running down the granite steps swinging a picnic basket as Frankie was climbing into the truck. She handed it to Nick with two quick kisses on his cheeks and stood watching as he climbed into the passenger side of the cab and they pulled from the driveway.

Now they were headed into town, the midmorning sun hanging in an azure sky, its rays dancing on Seneca Lake. Normally Frankie would have loved a day like this but the cab seemed claustrophobic with Nick Gradin’s surly attitude sitting between them.

“It’s not my fault you didn’t know who I was,” she said quietly.

Turning to her, he cocked a skeptical eyebrow and crossed his arms over his chest.

“You knew your father had a stepdaughter.”

“And a child bride,” Nick remarked coldly. “I expected my stepsister to have pigtails and braces. Not…” His hand motioned up and down her torso.

“Well, you didn’t seem to mind the package yesterday.”

“Yesterday I thought you were Joseph’s assistant.”

“Funny, yesterday I thought you were a womanizing pig of a manwhore.” She shot him a patronizing smile. “Guess one of us was right.”

He frowned. “If you’ll recall, I wasn’t the one who came on to you in the field.”

“As I recall, it was you who was ready for action in the wine cellar.”

“I was simply reading the signals you were sending out.”

“Then you have a faulty GPS.”

“My wiring is just fine thank you.”

“I suppose you think it is, with all the woman you have tumbling into your posh Philadelphia bed.”

“Now what the hell is that supposed to mean?”

“I have no idea what you’re…oh, this is stupid. Pull over here.” Nick motioned to a dirt road that led to a small alcove near the lake.

She’d been parking there once in high school.

“I’m not going to see Joseph until we clear this up and can at least be civil to each other,” he said.

Frankie acquiesced. He was right. It wouldn’t do Joseph any good to have them bickering in front of him. She turned the truck into the trees, their pumpkin and gold leaves floating passively on the gentle breeze. They bumped down the dirt tracks, the center lane overgrown with the dried weeds of summer. Frankie felt as if she was entering the lion’s mouth. Anger surrounded Nick like the cloud of dust trailing behind them. She had no idea why he was so pissed when she’d only spoken the truth.

Shoving the truck in park and shutting off the engine, Frankie stared out over the lake. Its cobalt surface rippled at the gentle touch of the fall breeze. Maybe this was the perfect place to help Nick see things her way. Though she hadn’t exactly started the conversation off in the right direction, maybe she could try again. “I think—”

As if he hadn’t heard her, Nick got out and slammed the door. Pacing in front of the truck, he pulled at his bottom lip, an angry scowl furrowing his brows. What the hell was his problem? Frankie got out and stalked after him. “For someone who wants to talk, you’re damn rude, you know that, Gradin?”

He grabbed her and pressed her against the front of truck, the solid planes of his chest trapping her. “I don’t know what my father told you about me but I do not—I repeat, do not—have a rotating door on my bedroom. There is no harem of beauties waiting for me in Philly. When I choose to sleep with a woman I like there to be a little chemistry between me and the lady.” His mouth came down hungrily on hers, his taste already familiar. When his tongue ran the seam of her lips, she had no choice but to open to his assault. Fisting his hand in her hair, Nick controlled the breath-stealing tempo while his other hand surrounded her breast, squeezing the sensitive flesh. Warm shocks of want shot straight to her pussy. Frankie’s hands seized the soft chambray of his shirt, her heart racing in her ears. Nick broke from her as abruptly as he began. “And there’s no denying our chemistry, Francesca.”
~~~~~~~~~~~~~~~~~~~~
BUY from Ellora’s Cave