This is a short story I wrote a few years ago. I’ve always loved it and thought I’d post it again for your holiday enjoyment. (It’s based on the “8th day of Christmas”)

Meghan dropped down in the small stool, tipped back her cowboy hat and laid her forehead against the soft belly of the Jersey, less than pleased she was here doing the evening milking—again. The youngest of eight sisters, she always seemed to get stuck finishing the barn chores. She never got to do anything exciting, like ride out into Mistletoe Canyon and find the missing cows. Resigned to her duty, she gripped a teat in each hand, rolled her fingers with a vengeance and sent milk pinging into the bucket between her feet. The cow let out a soft bellow.
:

“Don’t take it out on Clarabelle, it’s not her fault she needs milking,” her sister Michelle said from the stall behind her as she leaned in and begin expertly milking the Guernsey at her hands. “Besides, having you ride out at night just didn’t make any sense. Marissa and Melinda will find the cows and have them back here before Maria and Mary have trimmed the Christmas goose.”

“I’m that transparent now am I?”

Mia laughed, patting the tawny hide of the cow standing over her two stalls over. “I’m surprised you didn’t trip on that pouty lip as you dragged your skinny ass into the barn. Besides, even Santa’s elves don’t take a break from their chores on Christmas Eve until every last train is painted and every dolly packed.” Her oldest sister and her twin, Molly seemed happiest at the Arizona farm, content to tend cattle, breed horses and gather eggs for the neighbors.

Twenty-five head of dairy cattle, two bulls, twenty-seven prize thoroughbreds, a dozen pigs, countless dogs, four geese, two swans and more chickens than Perdue could cook in a month—that was the Morgan farm. Molly and Mia had been running it with a few local hired hands since their dad passed away from lung cancer five years ago when Meghan was just starting her freshman year of high school. He’d lost his high school sweetheart, and her mother, in a freak rodeo accident when Meghan was only five. Fiercely independent, her sisters had insisted on keeping the sprawling acres of land even when it meant every last minute was spent isolated from the rest of the world, earning a living.

As soon as she had enough saved, Meghan was shaking the dust of Peartree Point from her boots and heading east to some college that didn’t include “community” in its title. There was nothing that could keep her here on the family farm.

Marissa nudged her chestnut mare, guiding her carefully down the slippery slope of Mistletoe Canyon, praying she could find the pregnant cows. Melinda’s horse nickered beside her, the billow of air pluming from its nostrils emphasizing the steady drop in temperature. The sun had set an hour ago, clouds rolling in, shrouding the full moon in a wash of black and gray. 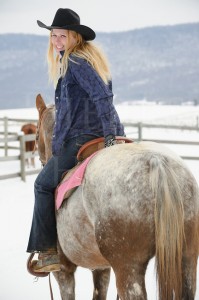 “Molly just radioed from the other side of the canyon. She’s got nothing,” Melinda said.

“I’d hate to have those cows calve tonight out here. I’m not sure the newborns will survive the squall coming in.” As if her words had summoned them, snowflakes floated lazily from the sky.

“Tell Molly to meet us on the other side of the ridge. We’ll join up by route 17. If we don’t find them there, we’ll go home and pick up the search in the morning.”

Marissa kicked the mare into a trot and gave the horse her head. They’d ridden this section of the land so often the horse knew instinctively how to maneuver safely over the rocky terrain even in the shadowed night. Ten minutes later as the snow fell in earnest, the canyon walls opened up. She could see the lights of the gator up ahead, but Molly wasn’t alone.

A motor home loomed over the gator, her pregnant cows tethered to its grill. Oh hell no! Some yankees looking for Santa in a cowboy hat weren’t going to ruin her Christmas.

Ayden stood his ground. In a short sleeved T-shirt, freezing his ass off, he was feeling more than a little desperate. The feisty blonde before him might be small in stature, but her attitude was rivaled only by the storm swirling around him. He hadn’t had a chance to explain himself when two horses thundered across the plain, their riders dropping to stand with the woman in front of him.

“We have a problem here, Molly?” the brunette from the horse asked.

The blonde tipped back her cowboy hat, exposing a heart-shaped face with rosy cheeks and full lips. Even pursed in displeasure, they looked damn kissable. “No problem here,” she responded. “I was explaining to this man that the cows he’s stealing belong to the Morgan farm.”

His brother Aaron chose that moment to poke his head out the door. “Can they give us a ride Ayden? It’s fucking…”

Alex plowed into him from behind, the two of them tumbling out of the stranded motor home. “I do not want to spend Christmas stranded in fucki…”

Ayden rolled his eyes as his brothers’ surly demeanors morphed into flirtatious charisma the moment they realized their rescuers were female.

“You look…” The third woman pointed first at Ayden then to Aaron. “And you…” Her finger moved to Alex. They got that reaction a lot.

“We’re triplets. Aaron, Alex and I’m Ayden Williams. And as I was saying we’re not stealing your cattle. We held on to them in hopes—”

“Their owners would rescue us.” Aaron finished.

“I’ve got the three duffles and a backpack of electronics.” Even at 20, Abraham, his youngest brother had the boyish look of a high school kid. Only his well developed physique hinted at his age. “They agree to take us to town?” he asked as he jumped down from the motorhome.

His twin Acton came down with as much enthusiasm. “Awesome, they brought horses.”

A whistle cut through the air, halting all the verbal confusion. Ayden turned back to the blonde. “One person.” She poked Ayden in the chest. “Why don’t you tell us what’s going on and why the lost cows that are keeping me from Christmas dinner are tethered to your motor home.”

Adam, Andrew and Anderson joined the rest of his brothers and he held his hand up, turned back to them and mouthed “Shut up.” He had hoped to negotiate the ride into town before his Good Samaritans realized there were eight hungry cowboys in need of rescuing. 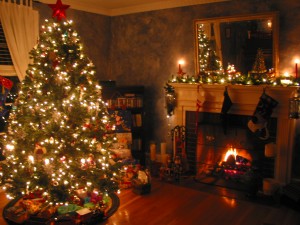 Meghan loved Christmas. The lights of the nine-foot Douglas fir standing proudly in the great room winked at her through the dining room door. Marie had started the fire while they’d been milking the cows. Presents in festive wrapping paper were scattered around the base, ready for the morning’s festivities.

“Are you sure there’s eight of them?” Marie asked, carrying the last of the crystal wine goblets and setting them around the additional place settings.

Mary balanced a tray of serving dishes, arranging them along the length of the table. “I think Mom and Dad always planned on a very big family. There’s plenty of room for all sixteen of us.”

The responsibilities on the ranch were so demanding, Meghan barely had time to do more than think about dating. Now eight men were being delivered to their doorstep.

“They’re brothers,” Mia said. “Molly said they’re buying the Fitzpatrick spread next door. I didn’t get any more than that over the radio.” Mia and Michelle carried more food from the kitchen. No one was worried there wasn’t enough to feed them all. They’d learned early on, that leftovers were never wasted. Mary and Maria had cooked enough food to feed a small country.

Footsteps pounded across the front porch. The wide door opened, the fresh scent of a Christmas snow carried in with all the men entering the foyer. Meghan would have to rethink that whole moving to the east coast thing.