I thought I’d share with you not only 13 facts about Christmas, but how about my gift to you … a wee bit of the eye candy? I promise there’s no calories in these tasty treats!

2. December 26 was traditionally known as St Stephen’s Day, but is more commonly known as Boxing Day. This expression came about because money was collected in alms-boxes placed in churches during the festive season. This money was then distributed during to the poor and needy after Christmas. (Nah, this is the day everyone boxes up the odd gifts and takes them back. If this guy were under my tree … no way would I return him!) 3. A Christmas club, a savings account in which a person deposits a fixed amount of money regularly to be used at Christmas for shopping, came about around 1905. (I’d save alllll my pennies if this guy was the interest gained!)

4. According to the National Christmas Tree Association, Americans buy 37.1 million real Christmas trees each year; 25 percent of them are from the nation’s 5,000 choose-and-cut farms. (And this is one really well cut trunk … I’d definitely choose it!)

5. Before settling on the name of Tiny Tim for his character in “A Christmas Carol,” three other alliterative names were considered by Charles Dickens. They were Little Larry, Puny Pete, and Small Sam. (I’d call this guy whatever makes him happiest! Because it is the season that’s all about happy.)

6. For centuries, St. Nicholas has been remembered by Christians for his generosity toward children and the poor. The real St. Nicholas lived in Turkey, where he served as bishop in the town of Myra, during the fourth century. (And visions of Santa danced in her head … )

7. Candy canes began as straight white sticks of sugar candy used to decorated the Christmas trees. A choirmaster at Cologne Cathedral decided have the ends bent to depict a shepherd’s crook and he would pass them out to the children to keep them quiet during the services. It wasn’t until about the 20th century that candy canes acquired their red stripes. (You know, sometimes I could do without the stripes.)

8. Christmas gifts are bestowed by different gift givers in various countries. These include Père Noël in France, St. Nicholas or Sinter Klaas in Holland, Father Christmas in England, the Three Kings in parts of Latin America and Spain, and Santa Claus in the United States. (Who cares what is name is if he delivers my gifts nekkid?)

9. Electric Christmas tree lights were first used in 1895. The idea for using electric Christmas lights came from an American, Ralph E. Morris. The new lights proved safer than the traditional candles. (Oh, this is one string of lights I wouldn’t mind untangling!)

10. In 1947, Toys for Tots started making the holidays a little happier for children by organizing its first Christmas toy drive for needy youngsters. (And it’s important Santa deliver those gifts!) 11. Reindeer are herbivores, which means they eat vegetation. In the summer, they eat leaves and herbs. In the winter, they eat lichen and moss. They use their antlers as shovels to break through the snow to find the vegetation below. (But thank goodness they can fly and deliver Santa to my house!)

12. In Sweden, a common Christmas decoration is the Julbock. Made from straw, it is a small figurine of a goat. A variety of straw decorations are a usual feature of Scandinavian Christmas festivities. (And sometimes straw should NOT be used in holiday decorations.) 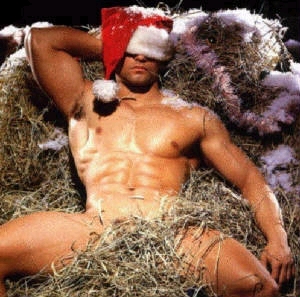 13. After “A Christmas Carol,” Charles Dickens wrote several other Christmas stories, one each year, but none was as successful as the original. (And yet here are all sorts of men imitating Santa … and they’re all as good as the original.)