Confessions of a Romance Author

I’d like to extend a warm welcome to romance author, Renee Vincent. Renee’s slipped in to share one of her diary entries … I do believe she’s stopped by to share a little something with her Viking heroes.  😉

I have a confession to make. While I’ve tried to stay true to the Vikings in my life, I’ve found someone new. Someone just as big and bold as Dægan and Gustaf Ræliksen, but without the sword. I’m sorry, I couldn’t help it. Believe me, I tried to avoid him, but the temptation to find out more about him was too great. I caved. It all started with just a simple glimpse into his world and bam! I was hooked. And now, I’m totally in love with this man.

Look, I know my Norse heroes are the bomb dot com and that they put most book boyfriends to shame, but I have to admit that the new guy…Brody Galven…well, he’s fast becoming a favorite of mine.

He’s tall and broad-shouldered with a just the right amount of scruff on his face to give him that rugged appeal. He works on a ranch, so he’s no stranger to hard labor. And because of all the hay bale tossing, wild horse breaking, cattle wrangling, and wood splitting he does on a daily basis—oh my! His body is hard-muscled everywhere. Did I mention the man can rock a tight pair of jeans?

Now I know he’s not the normal kind of guy I tend to drool over as his arms are sleeved with brightly colored tattoos, but this bad boy wears them well. Along with his ink and his ability to rope and ride, there’s a mysterious dark side to him that I can’t help but be drawn toward. Granted, he’s got some demons to fight, but I know with just a little time and some tender affection, he’ll open up.

I know what you’re thinking and I’d appreciate it if you’d quit judging me. If you knew this guy like I do, you wouldn’t be so quick to slight him. 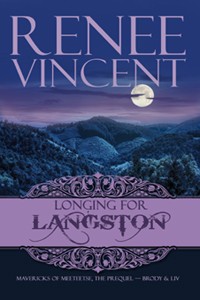 He’s got a heart of gold and when push comes to shove, this cowboy won’t back down. Yeah—I said it. Cowboy!

I’m writing cowboy romances now and there’s nothing you can do to stop me. Don’t worry…I’m not giving up on my Vikings. I’m still working on my Warrior Series, but because of all the trips I’ve made out West, (and the fact that I live on a hundred-acre horse farm) I’ve been inspired to write about cowboys. Hunky, Alpha-male, cattle ranchers who are just as skilled in the bedroom as they are in the saddle.

What’s the title and when does this book release, you ask? Well, it’s called LONGING FOR LANGSTON (a Mavericks of Meeteetse prequel) and it’s included in a boxed set with my fellow InkHeart Authors that has released today, September 15th! Then in late October it will release as a single title, with the first book of the series to follow in November.

I hope you can forgive me for jumping ship—or longship, rather—of my Norse warriors and mounting up with the Mavericks of Meeteetse. I promise these Wyoming cowboys will wrangle your interest, rope your heart, and rock your world. 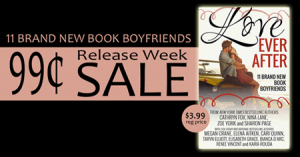 LOVE EVER AFTER: Eleven All-New Romances!
ONLY 99¢ during release week

For a limited time, get eleven ALL-NEW romances in one EXCLUSIVE collection by New York Times, USA Today, and National bestselling authors now before it’s too late!

Longing for Langston (Mavericks of Meeteetse Prequel — Brody & Liv) by Renee Vincent: Tired of living in his brother’s shadow, Brody Galven wants the folks of Meeteetse to realize he’s no longer a bad boy screwup. He also wants his childhood best friend, Olivia Langston, but admitting he loves her is out of the question…even when she’s about to walk out of his life forever.

Reign of the Vampire Book 1 by Sharon Page: Moving to Manhattan to work at a literary agency, Lauren is drawn into the world of seductive biker vampire Batiste Carlyle and his eternal battle with his destructive billionaire brother Renoir. As Lauren uncovers secrets of her past, she begins to trust Batiste, until he takes her captive…

Project Virgin by Megan Crane: First-year lawyer Scottie Grey breaks off her long engagement to a cheating liar and decides it’s high time she got rid of her virginity instead of saving it for a wedding day that might never come—maybe to San Francisco’s infamous and most intimidatingly sexy attorney Damon Patrick?

Committed (Lost in Oblivion, #3.7) by Cari Quinn & Taryn Elliott: With the crash and burn of Simon Kagan’s singing career, things have been a little off between him and Margo Reece. The passion is there—it’s always there—but he wants to make sure she knows just how invested and committed he is to making her happy. Even if that means breaking out a ring and convincing her to wear it.

All About the Bear by Biana D’Arc: Welcome to Grizzly Cove, where the sheriff has more than the peace to protect. The proprietor of the new bakery in town is clueless about the dual nature of her nearest neighbors, but not for long. Sheriff Brody will clue her in and convince her to stay calm—and in his bed—for the next fifty years or so. Yeah, that might be enough. Then again, maybe he’ll keep her forever.

Fifteen First Dates: Date One (Divorcee Dating) by Elisabeth Grace: Follow along with Tessa Woodrow as she plummets headfirst back into New York City’s dating pool and finds out the waters are choppier than she remembered.

Laguna Heights (Laguna Beach #2) by Kaira Rouda: Annie and Hank created a perfect life in beautiful Laguna Beach but when a dark secret is revealed, will their marriage survive?

Plush by Nina Lane: She’s his wicked stepmother, and he’s no prince.

Fighting for Forever (The Springs) by Elena Aitken: Ever since falling in love at The Springs, Rhys and Kari have been living a fairy tale, but fairy tales aren’t real. Or are they? When Kari runs from the idea of forever, Rhys will have to fight for them. But will it be enough?

Renee Vincent is a bestselling Contemporary & Historical Romance author who also pens humorous, sweet contemporary romance (with a smidgen of spunk) under the name GRACIE LEE ROSE. From the daunting, charismatic Vikings, to the charming, brazen Alpha male heroes of modern day, (now including cowboys) readers will be whisked away to a world filled with fast-paced adventure, unforgettable romance, and undying love.

10 Responses to Confessions of a Romance Author