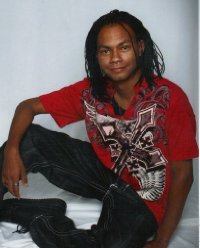 I’d like to welcome my second guest this week for the Blogger Book Fair, Drako Damon. Drako was born in St. Louis, Missouri. He is mainly a fantasy writer, though he also writes some poetry and general fiction. He’s very active on both twitter and facebook and you can visit his website to stay current with his newest releases.

It was a night like any other night. I’d just gotten off work from my call center job, and it took me about two hours to get home on the bus. I was tired as hell, but at least there was a good smell coming from the house. Apparently I’d come home to a nice hot meal. It’s nice to know something is going right. Today had been long and crappy. It was ten o’clock at night, and I’d been gone since nine this morning. It’d been a rough few months. I’d lost a job and my car, but found this one and had to start making my way around on the bus. It wasn’t fun, that’s for sure, but it had to be done.

At least I got to enjoy my meal. The person I was with was still good company. He didn’t work at the time, but I couldn’t fault him for that. He was trying to find another job. We were at that point in life where we’d hit a rough patch and were picking ourselves back up.

At last it was time for bed. During the week I don’t stay up too late because I don’t want to wake up late and not get to work on time. So he and I went off to bed. I drifted off to the sweet oblivion of sleep, or so I thought.

As I came to, I wasn’t where I went to sleep. My other half was nowhere to be found, and I was in a place I’d never seen before. It looks like something you’d only see in the movies. The room I was in was bigger than my entire apartment building. I was lying on the floor right in the middle of the room, and I quickly sat up to take in my surroundings.

It seemed like some kind of hall. There were windows letting in bright sunlight in a clearly stone building. I was in a palace of some sort, and though I wasn’t up to date with the structure of a palace, I’m pretty sure I was in a throne room. Why? Because there was a throne at the end of the room with what was positively the single most attractive male in existence sitting on it. Judging by the extremely bright light all around in this currently empty throne room, save for the eye candy on the throne and the black marble throne he’s sitting on, I figured I must be dead.

A deep rumble of laughter startled me from my thoughts. I looked to the man, who was clearly amused by me for some reason. Perhaps he heard my thoughts?

“Of course I hear your thoughts, human. I’m a god.” He smiled at me.

I can’t say the smile is warm, exactly. This guy was hard to read, and I’m normally great at reading people. I figured since I’m dead, he wouldn’t mind if I enjoy the view. He was a huge towering man, even though he was sitting. He dressed in a black chiton, but it was pulled down to his waist, leaving his chest bare. And what a chest it was. This guy had the body an average guy dreams about, and a short too skinny guy like me drools over. To make it even better (for me at least) he had tattoos all over his torso. I couldn’t make out exactly what they were, but they appeared to be several small dragons with names written around them.

I tore my gaze from his body and looked into his eyes, which were a strange swirling silver. His hair was long and black and rested down his back. His skin was absolutely flawless and brown and he appeared to be in his late twenties at the most, maybe early thirties. God he was gorgeous.

He cleared his throat, snapping my attention back to him again.

“I’m a very busy god, so it would be nice if you’d finish gawking at some point in the near future.”

“Yes, I’m a god,” he told me, clearly following my line of thought. “Come closer. I tire of shouting down the room at you.”

Ok, so I was definitely dead. How else would I come to meet a god? It seemed like now was a good time to start obeying, maybe redeem my soul a little bit. He must be the god of the dead if I was seeing him, right?

By this time I’d moved forward and was now standing directly in front of him. I felt like a two year old standing next to this giant. He smiled at me.

He shook his head. “No, that is your name. That name you were born with doesn’t fit you. In my presence, you are and will always be Drako.”

Well, that was just interesting. I did hate my real name, and that’s why I went by my nickname, a unique spelling on the Latin word for dragon. But anyway, I figured I’d better start talking before I get cast into hell.

“I’m known by many names, none of which will ring a bell to you because I eliminated myself from human history on purpose. I am Jarel, the Black Dragon God. And you are not dead.”

I couldn’t hold back my skepticism. “If I’m not dead then why am I here? Gods don’t talk to people in my world.”

Jarel nodded. “This is true. Man has long since lost touch with us, and I for one am content with that.”

Well, what the hell was I supposed to say to that?

BLURB (First Book in The Dragon Hunter Series):
Andreas was born a Spartan warrior, long before human history even records Sparta existing. He served directly under Ares, until the day his lover was killed on the battlefield in front of him. On that day, he met his father, the mysterious Black Dragon God known as Jarel. From then on, he served his father faithfully, enforcing the laws of the primordial embodiment of black fire and father of the paranormal. Now, in these modern times, he hunts the rogue vampires and their leader. Little does he know, there’s more to this than vampires simply turning against his father.

While protecting the lovely Cassandra Odele, Andreas must battle forces he doesn’t know as he attempts to stop the resurrection of the Titan king, Cronus. Added to his problems, he now has two teenage nephews to see into adulthood. Of course, there’s always a twist when dealing with the gods, and Andreas will come face to face with his past, leaving him to decide which is more important, his soul or the world?

BUY from AMAZON
BUY from BARNES AND NOBLE

One Response to BBF – Drako Damone Stops By