I’m celebrating the beginning of summer with 25 other authors as we join together in a sexy summer solstice blog hop, where the grand prize is a Nook Simple Touch with a glowlight.

Click HERE to join the hop from the beginning.

There are all kinds of prizes along the way including books, swag and gift cards. Participants who follow the hop all the way through between 9am EDT WEDNESDAY, JUNE 20 through noon EDT SUNDAY, JUNE 24 will be eligible for the grand prize.

This hop we were challenged to use a word generator to create a sexy scene for our readers. My story must include a popstar, salsa dancer and a news anchor. The scene will take place in a city park. And I need to work in happy, successful and drunk characteristics. And I get extra credit if I manage to work in the phrase “streaks of purple and gray“. LOL! Let’s see where this takes us. Please enjoy this summer solstice scene …

~~~~~~~~~~~~~~~~~~~~~~
Despite a full pot of coffee and two cans of diet cola, Kate Silva could barely drag herself to her Mustang convertible. The evening heat wafting off the sidewalk wasn’t helping the exhaustion weighing down her limbs. It seemed summer had arrived early in the sleepy town of Pinecrest. Maine didn’t usually see temperatures in the nineties until well into July. Heck, with the solstice still several hours away, summer still hadn’t officially arrived. But you couldn’t prove it by the heat and humidity making a mockery of Kate’s chignon and makeup.

Her early morning news cast had turned into an early afternoon luncheon with the governor and the nap she’d so desperately needed to make it through the evening ahead was usurped by another family emergency.

“Oh, sweetie, I’m so sorry you couldn’t rest before the fund raiser tonight.” Aunt Marion locked the door to Patchouli Gardens, her spiritual supply and natural herb store. “I really thought Lucy was choking with all those yards of lanyard wrapped around her little body.” She scooped up the little wiener dog at her feet. “I just don’t know how she gets into that storage room.” Marion’s baby speak was directed at the happy mutt showering her with doggie kisses. “No I don’t. I just don’t know. You had mommy scared right out of her mind when all the boxes tumbled. Yes you did.” Her aunt leaned over and kissed her cheek and the dog snuck one in as well. “Anyway, thank you.”

“Of course you’re welcome.” Kate scratched the dog’s ears. Truth be told, she’d do anything for the eccentric woman with her Bohemian skirt and her stylish hair with streaks of purple and gray. The woman was all she had left of family.

When Aunt Marion had called to say her store was in trouble, Kate had pasted a smile on her face, accepted a job at a local television station and moved in. The six month internship had segued into a street reporting position and eventually the anchor desk. Three years later Patchouli Gardens was in the black and Kate had to admit, she’d grown fond of the little town and protective of the woman who was more like a mother than an aunt.

Dumping the oversized handbag from her shoulder into the backseat, Kate slipped in behind the wheel and wondered again why they’d asked her to be part of the summer concert series at the city park, Dancing Under the Stars, like a takeoff on the popular show. Only she was nothing more than a small town news anchor at a small town television station in central Maine. It certainly didn’t fit her definition of successful, let alone, high profile celebrity. At twenty-eight Kate had expected to be traveling the world reporting the news, not quietly living with her aunt and a troublesome weiner dog—both of whom she loved with all her heart.

As if reading her thoughts, Lucy let out a happy yip.

“This is going to be so much fun,” Aunt Marion said as she tucked Lucy in the little picnic basket at her feet and paused. “You look so beautiful, Katie. Maybe this is the night you find someone special.” Tears welled in her eyes. “That rose quartz you’re wearing calls to your soul mate.”

Kate had never believed the crystals her aunt held so much faith in would do anything, but she’d put on the beautiful necklace because it had complemented her dress. “Aunt Marion, I appreciate the thought, but you and Lucy are enough for me right now.” 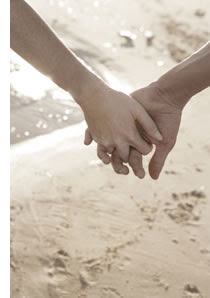 “That’s nonsense, child. Everyone needs someone to complete their heart.” She laughed and buckled her seatbelt around her plentiful waist. “I guess we’ll just enjoy the evening and worry about true love later. Tonight promises to be so much fun. I can’t wait to see little Markie. It’s been years. I can’t remember the last time I saw him in a concert, let alone here in town.”

Kate pulled away from the curb, curious about what kind of popstar could have possibly grown up in Pinecrest. The whole town had been buzzing for weeks about Markie’s return like he’d gone out and made a name for himself. But Kate’s internet searches for a Mark Hood made famous had turned up nothing but a lot of articles about his high school football career and a graduation photo. The photo hadn’t been too shabby as she recalled—a handsome young man with an infectious smile, a couple of dimples and a sandy mop of unruly hair.

“You know, it is the solstice. Magical things happen on the solstice.” Aunt Marion clapped her hands together. “And how serendiptious that two of my favorite people in the world got paired together.”

From the glint in Aunt Marion’s eye, Kate was thinking—it probably wasn’t a coincidence at all.

Mark Hood hadn’t been home since high school graduation. His agent had had an apoplectic fit when he’d turned down the gig in Chicago in favor of the Civic Center in Portland. But after the six month whirlwind tour of Europe, he was looking forward to a couple weeks home with his dad and a small venue to reconnect with his local fans.

What he needed was full blown vacation. Hell, after five years of mega-hits, what he really needed was a sabbatical!

The invitation to this charity event, regardless of how lame, couldn’t have come at a better time. It was the perfect reason to step away from all the screaming fans and chaos that had become his life. He only hoped the local news anchor they’d paired him with to dirty dance to one of his own songs wouldn’t make him look like a complete dork on stage. No doubt the woman was pushing her seventies. No one retired in this town. He looked around the local celebrities hidden behind the small stage they’d set up in the park. At least he couldn’t look worse than the salsa dancers who seemed to be stumbling over each other like they were drunk.

Mark turned and looked down into the eyes of a young girl in a pink ballet tutu.

“Well, congratulations.” He bent down and whispered conspiratorially, “I’m dancing too, but I’m really nervous. I hope my partner looks as beautiful as you.”

“Thank you.” A blush crawled up her cheeks as she shyly lifted one of the programs and a pen. “I know you’re Marcus Tyrone from Radio Haze and I was wonder—”

“Marissa we talked about this.” The man in charge swooped over and stepped between them. “I’m sorry Mr. Tyrone. I asked everyone—”

“No, excuse me.” Mark gently moved the man to the side and put his hand on the slumping shoulder of the little girl. “Marissa was just giving me some advice on how to calm my nerves.” He winked down at her, took the program, signed his stage name with a flourish and bent to kiss her soft cheek. “Let’s hope we both kill ‘em out there!” The girl hugged him and skipped off happily.

He clapped the guy on the back. “Don’t worry about the autograph seekers. I don’t mind signing a few—”

He barely had time to register his late mother’s best friend before she wrapped him in a fierce bear hug. The familiar scent of patchouli and hair spray wrapped around his nose, sending him back to his youth and hours spent sweeping floors and stocking shelves while his mother shared tea and secrets with Marion at her store counter. He’d grown up believing the woman currently bruising his ribs was a witch. With all those crystals and herbs it was hard not to think something mystical happened in her shop.

“Ms. Marion!” He returned her hug, happy to see a familiar face. “So good to see you!”

She pushed away from him, but kept her hands firmly holding his biceps. “The fame doesn’t seem to have hurt you any.” Marion laid a hand on his cheek. “Your momma would be so proud.” The last words caught in her throat. “We’ll catch up later. In the meantime, I want you to meet your dance partner.”

The breath caught in Mark’s lungs as Marion stepped back and introduced the stunning woman behind her. The little red number she wore hugged her curves like a second skin. With the sexy waves of ebony hair falling around her face,

the bun at the back of her head looked anything but matronly. As a matter of fact it left her throat exposed, her pulse hammering in time with his. He couldn’t seem to make his brain work. And from the way the stunning woman’s mouth hung open it looked like she was having difficulty as well.

Marion clapped her hands together. “Kate Silva, I’d like you to meet Mark Hood. Mark, this is my niece, Kate.”

“No …. but you’re … I mean holy shit! You’re Marcus Tyrone, from that reality show Rock Icon,” Kate stammered as she stretched her hands across the expanse as manners would dictate. “Aunt Marion never said the boy who helped at her shop was a world renowned singer/songwriter.”

“And no one mentioned my dancing partner was such a beautiful woman.” He wrapped her delicate fingers in his hand, enjoying the electric current shimmering up his arm and warming the rose quartz in his pocket. “That’s a beautiful necklace,” he whispered, cradling the glowing stone at her throat in his other hand.

“Oh, what a lovely couple you make.” Aunt Marion sighed as she gathered a wiener dog from a picnic basket at her feet. “What a coincidence you were paired together the night of the solstice. Who knows what kind of magic can happen tonight.”

Thank you so much for stopping by. I love summer concerts in the park. It’s one of the activities Mr. Nina and I wouldn’t miss. A picnic dinner, a couple of camp chairs, a bottle of wine, great music and a sultry summer night with the man I love. What more could a woman want? What’s a favorite summer activity you wouldn’t miss?

One person commenting between now and SUNDAY, JUNE 24 at noon EDT will be chosen at random to win a print copy of RIPE & READY (including my novella Divine Deception) and a $10 Amazon Gift Certificate. (Book shipping to US and Canadian residents only. An international winner will receive a $25 Amazon Gift Card only.)

66 Responses to Blog Hop Into Summer!