One World Over: The Barely-AU and the Birth of Anchored 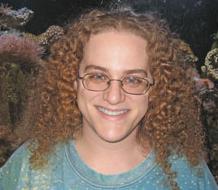 I’d like to welcome guest RACHEL HAIMOWITZ. Rachel has just begun a blog tour for her newest Release Anchored. Welcome!

I’ve always been fascinated by barely-alternate alternate universes in stories. Secret vampires running detective agencies in modern LA, secret dog shifters owning bars, secret succubae who don’t know what they are but accidently eat people’s chi on occasion . . . and yes, yes I do watch too much paranormal TV, why do you ask?* Stories where the world isn’t so fundamentally different from our own, where just one small thing is different (well, okay, maybe a big thing, but small on a quantum scale), birth some fascinating contrasts at the crossroads.

Stephen King is a master of the barely-AU, and long one of my idols in that regard. From The Stand to the epic Dark Tower series, everything he touched was just a little sideways. Stargate has done some great work with it too, whether through the quantum mirror or a rift in space-time. And let’s face it, it would have been hot to see McKay make out with Rod.

But I digress. After twenty-odd years of watching and reading the masters of the barely-AU, I knew I wanted to try one myself. But I didn’t give it much thought until one spring when I found myself in the middle of a busy newsroom floor at a 24-hour cable news channel. I was working fourteen-hour days logging tape, doing research, and running scripts for an evening broadcast. Our anchor was hosting a big panel one night on, of all things, the Aqua-Teen Hunger Force Lite-Brite bomb scare in Boston. (I. Shit. You. Not.) They needed extra make-up artists to get all the guests ready on time. Zaula Pahn’s** (remember her? Don’t worry, neither does anyone else) makeup artist was sitting in her little work-room right off our news floor, chewing gum and reading a magazine. I was sent to fetch her. “Sorry,” she said. “I only touch Zaula Pahn.”

Well, if all that wasn’t me stepping through a barely-AU portal into a New York where Lite-Brites shaped like cartoon characters shut down entire cities and makeup artists were salaried to work for 30 minutes a day, I don’t know what was.

So, with TV news swallowing my life, and the idea of the barely-AU having crawled and nested firmly back in my brain, I sat down to write Anchored, a barely-AU set in modern Manhattan and starring a slave news anchor owned by his network. TV news staff often work 80-hour weeks anyway, and Zaula Pahn already seemed to own her makeup artist; it was hardly a stretch.

Forming the Anchored world—one with iPhones and gluten-free bagels and copies of The Economist and also, oh yeah, institutionalized slavery all around the globe—was some of the best fun I’ve had at work in a good long while. I finally got to write my barely-AU, and I didn’t even need to whip out a bunch of goatees to do it. 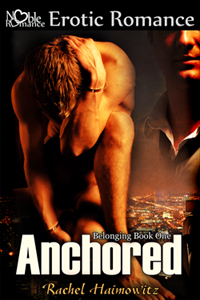 BLURB:
Network news anchor Daniel Halstrom is at the top of his field, but being at the bottom of the social ladder—being a slave—makes that hard to enjoy. Especially when NewWorld Media, the company who’s owned him since childhood, decides to lease him on evenings and weekends to boost their flagging profits.

Daniel’s not stupid; he knows there’s only one reason a man would pay so much for what little free time he has, and it’s got nothing to do with his knowledge of current events. But he’s never been made to serve like that before, and he fears he won’t survive the experience with his sanity intact.

He finds himself in the home of Carl Whitman, a talk show host whose words fail him time and again when it comes to ordering Daniel to bed. Daniel knows what Carl wants, but it seems as if Carl isn’t willing to take it, and Daniel’s not willing to give it freely. His recalcitrance costs him dearly, but with patience and some hard-won understanding, love just might flourish where once there’d been only fear and pain. Can Carl become the anchor in Daniel’s turbulent life, or will he end up the weight that sinks his slave for good?

***GIVEAWAYS *** Rachel will be giving away…
* 1 ebook copy of Counterpoint: Book I of Song of the Fallen
OR of Sublime: Collected Shorts (winner’s choice).
* 1 swag pack featuring cover art from Anchored and my other works.
* 1 extra swag pack to the first commenter to name all three shows
referenced in the first paragraph of this post

And continue to follow RACHEL on the rest of her tour. And visit her blog on JANUARY 23 for your chance for more prizes.

32 Responses to One World Over: The Barely-AU and the Birth of Anchored