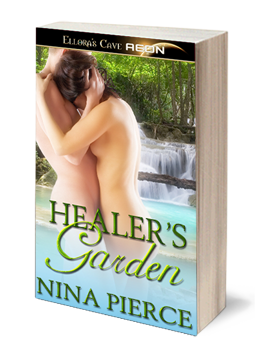 In the 23rd century, after a virus has killed off a large portion of all females and nearly every male, continuing the human race has become a government concern. Healthy males are enslaved and kept as “breeders”. “Healer’s Garden” is the journey of a woman who’s empty heart finds love in the most unlikely of people. Please enjoy this excerpt …

Patience. That’s what was required of him. But damn, he’d been treading water a hell of a long time while he waited for destiny to change the course of his life.

Brenimyn didn’t enjoy these monthly exhibitions any more than he liked copulating with Kylie. Though she’d never admit it, she detested his touch. He didn’t mind. It was less confusing without emotions getting all tangled in their peculiar relationship.

Since arriving at the Garden three years ago, Brenimyn had become accustomed to arrogant women who thought they were the only intelligent creatures walking this earth. Kylie was a prime example of that conceited attitude personified.

To the women before him, he was nothing more than a stud. Stupid, beastly and-inhuman. Oh, if only they knew what he could do, they wouldn’t think themselves so superior, now would they? But the time had not come to travel that particular road. Preparations still needed to be made. In the meantime, he would swallow his pride and let the mauling begin.

“Their physiques are quite different from ours, not all cushy and round. Rather ugly if you ask me.” Kylie pulled off Brenimyn’s tunic and smiled up at him. “Sorry, Brenimyn. I know the truth stings.”

Forcing his lips to lift, he bent and kissed her cheek. “Nothing is as beautiful and sweet as a woman, Kylie. Not even the flowers in the gardens.”

“Thank you.” She callously patted his stomach with a cold hand.

“Now, Brenimyn is going to take off his breeches. Though you all studied anatomy in school, the first look at a man’s genitals can be shocking.”

Brenimyn untied the cords at his belly slowly, seductively. This was the only time he had control and he stretched the moments out until the females before him leaned forward in breathless anticipation. His eyes locked on the only woman in the room who seemed less interested in this whole charade than him. The raven-haired beauty actually looked lost despite the maturity lining her face. Her hand caressed her cheek even as he thought of her. Her eyes shifted uncomfortably around the room, not watching as the fabric pooled at his bare feet and the inevitable gasp of awe echoed off the walls.

“Please come up and have a closer look,” Kylie said. Her hand fondled his buttocks. Touch but don’t desire, this one is mine, her caress communicated to the breeders even as her lips curved into that plastic smile he’d come to despise. “My mate is a wondrous specimen.”

Brenimyn resented Kylie. He belonged to no one. Least of all her.

On shaky legs, the dark-haired woman approached with all the others. Her gaze searched everywhere but the one place he willed her to look-his face. For some reason, he wanted her to see him, not as a supplier of sperm, but as a man.

Like all the others, her eyes focused only on his physique. Her gaze slid over his well-defined chest he worked hard to maintain. She followed the small line of blond curls around his navel then lower. From her frank appraisal, he wondered if she had ever seen a human male as natural as the day he was birthed. This woman was no different from all the others. Disappointment slumped his shoulders.

Winding her fingers into the yellow mass of curls, Kylie’s fingers cradled Brenimyn’s testicles. “Touch everything, it’s all right.”

At Kylie’s tone, Brenimyn dropped his gaze to the floor. He worked to block out the uncomfortable flurry of fingers petting his skin. He thought again of the Governmental Body of the Garden and wondered how much longer they would keep him as head of the male breeding population if Kylie didn’t conceive soon. As much as he abhorred this display, he needed to be here. He was desperate to meet all the new women entering the Garden. After the mating ritual with Kylie, he’d circulate through the other instructing rooms under the pretense of checking his breeders. Surely the woman he sought would be among this breeding class. Although the girls currently giggling and fondling his body couldn’t really be classified as women, now could they?

Lost in his own thoughts, Brenimyn wasn’t prepared for the shock wave tearing through him like a jolt of electricity. He stared at the fingers trembling along his forearm then into the amber pools that had held his gaze since he entered the room. He wasn’t supposed to meet the women’s eyes when they were this close, but the unexpected tingle of awareness had broken his usually stoic concentration. The beautiful brunette looked at him through thick lashes as if she recognized him. Her mouth trembled with a smile. Did she feel it too? He studied her, trying to discern if she sensed the flow of knowledge rushing between them.